The Diamond Mine: Dive Deep

The Diamond Mine Cloud

More Pictures from the Diamond Mine 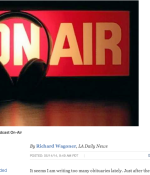 The Los Angeles Daily News has written a nice memory of Diamond. Link Deaths of Dave Diamond, Bill Scott add to airwaves’ loss By Richard Wagoner, LA Daily News POSTED: 05/14/14, 9:49 AM PDT | It seems I am writing too many obituaries lately. Just after the news of the loss of veteran newsman Lee Marshall (the voice… Read More ›

The Hollywood Reporter has written a nice tribute to Diamond. Link “The Diamond Mine,” a nightly mix of acid rock and psychedelic poetry, was a big hit in Los Angeles and San Francisco in the late 1960s. He was one of the first to play The Doors. Dave Diamond, whose influential “The Diamond Mine” rock… Read More ›

The Diamond: Break On Through

Dave Diamond passed on Monday afternoon. He was peaceful at home. Our thoughts are with his friends and family. Diamond meant a lot to many people, changed lives, and instilled a sense of good vibes rocknroll in everyone he touched. He will be missed, but his spirit lives on. Break on through, Diamond, break on through. Diamond’s Laws… Read More ›

Actress Yvonne Craig becomes a “Bat”-chelorette on this 1967 segment of “The Dating Game.” Via Shockcinemagazine

As a professor, Diamond was a big influence. These are a few quotes and memories by his students collected by Heather Murchel. “I remember meeting Dave Diamond for the first time in 2002 when I first toured Black Hills State University,” said former student Aaron Nelson. “Growing up in a small, eastern South Dakota town… Read More ›

As a DJ in LA and San Francisco, Dave Diamond reached millions of people. As a college professor he shaped many lives. Got a great Diamond story or memory? Leave it below in the comments section.

The Diamond Mine Feed